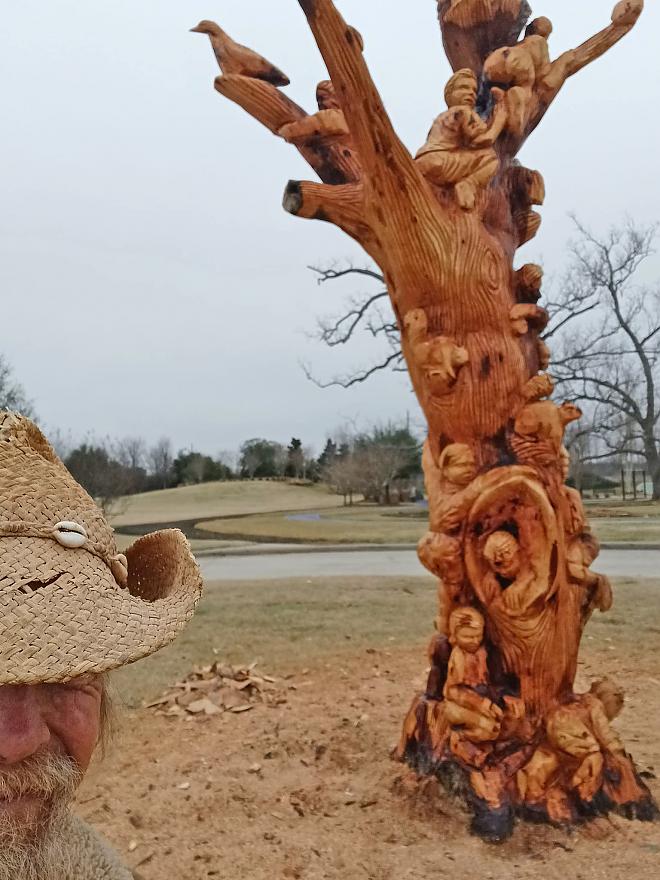 A dead tree outside The Club at Riverstone has received new life as a beautiful piece of community art thanks to wood carver James Phillips.

Despite our best efforts, a tree gracing our amenity complex died. Rather than chopping it down and hauling it away, we decided to turn it into something Riverstone residents could enjoy.

We got the idea from our sister community, Veranda. When the community was first being developed, attempts were made to save a 100-year-old pecan tree by Johnson Development. The efforts proved unsuccessful, but the development director remembered hearing about Phillips, who carved fallen trees and stumps in Galveston after Hurricane Ike 12 years ago. Veranda sought him out, asking him to turn that tree and four others into works of art. The results were stunning.

When our community was faced with deciding what to do about the tree at The Club, we decided to call on his services.

Over a period of nearly three weeks, Phillips used a 36-inch large chainsaw to rough out a design. He then scaled back to smaller chainsaws and eventually an electric saw with tips that allowed for fine detailing. When the carving was complete, he finished his creation with spent motor oil.

The result was a playful sculpture featuring 10 children, three owls and four birds. It is a stunning addition to the works of art that dot our community.

We are so pleased that we were able to preserve this beautiful old tree for the next generation of Riverstone residents. Pay us a visit and see this amazing transformation today.