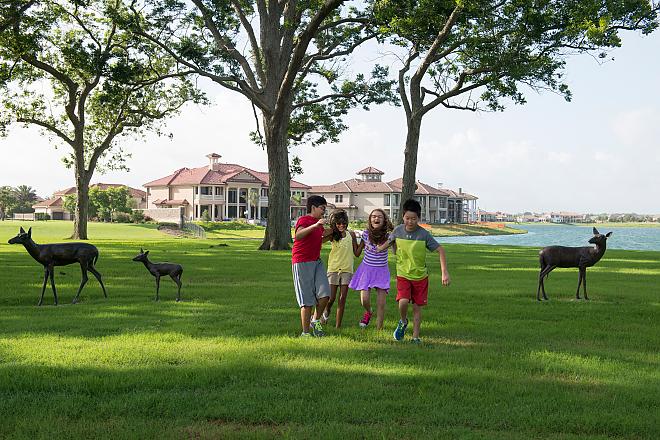 The Fort Bend area lost an important artist last year — Bob Pack. And Riverstone residents remember him well every time they see his bronze deer and duck sculptures installed throughout the community.

The sculptures were one of the first community art projects Johnson Development commissioned and it was natural the prolific Fort Bend developer would turn to one of Sugar Land’s premier sculptors.

A long-time Sugar Land resident, Bob began sculpting full time in 1978. His artwork can be seen throughout Fort Bend, including a signature work at Sugar Land Town Square — a statue of Stephen F. Austin emerging from the Brazos River that took two years to complete.

His life-size rendition of “Christ, the Good Shepherd” is the centerpiece of the Hope Garden at Sugar Land First United Methodist Church. Bob presented the first cast of that sculpture, sized for a tabletop, to Pope John Paul II in 1989.

Additional bronze monuments can be found at Richmond City Hall, which features a statue of long-time Richmond Mayor Hilmar G. Moore. “The Guardian” at the Sugar Land Police Department headquarters shows a police officer with a young boy. Bob also created a “Legends of Golf” series featuring sculptures of Arnold Palmer, Jack Nicklaus, Payne Stewart and others. The Payne Stewart bronze is awarded annually during the Tour Championship in Atlanta to the golfer exhibiting exceptional character, sportsmanship and an unwavering commitment to charitable causes. He also sculpted a “Birds of the Gulf Coast” series.

Bob’s work can be seen in Dallas, Ohio, Florida, Massachusetts and New Jersey, and his collectors hail from across the globe. He has received national recognition in Newsweek, USA Today and Golf Magazine.

Bob is survived by Cindy, his wife of 46 years, their two sons and three grandsons.

We are honored that his memory and talent live on in Riverstone.